Confluent is an American big data company found by three LinkedIn Engineers led by Jay Kreps. It is focused on the open source Apache Kafka real-time messaging technology that Kreps, Neha, and Jun created and developed. Confluent has marked a record in the Stream Analytics that provide immediate access to key business intelligence insights through real-time data exploration.

Kafka, the project started for Linkedin in the year 2010, is built to handle all the data flowing through a company and to do it in near real time. Kafka is often used as a central repository of streams, where events are stored in Kafka for an intermediate period of time before they are routed elsewhere in a data cluster for further processing and analysis.

Since the launch in 2014, the company has raised nearly $31 million in venture capital funding. Confluent's business is built around open source software but premium versions with added capabilities for a fee. Confluent also provides technical consulting and Training as service to its customers. 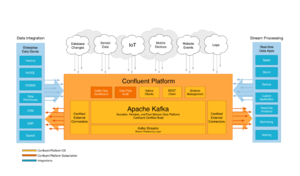