Citus Data, an analytics company situated in Silicon Valley, California, develops a distributed analytics database that allows users to run SQL queries over large data sets. It transforms PostgreSQL (A powerful, open source object-relational database system)[2] into a distributed database delivering a unique combination of parallel analytics and real-time reads/writes. It provides a database that scales out across commodity servers and parallel processes queries across the cluster nodes to deliver fast analytics on large datasets.


The CitusDB database makes it possible to tackle heavy analytic workloads orders of magnitude faster than what has been possible with PostgreSQL before. This analytics database is used by enterprises across multiple verticals, including e-commerce, retail, security, ad-tech and mobile analytics. It has recently come up with a newer verion, Citus 5, which now works as an open source that has helped in achieving scalability and dealing with large amounts of operational and analytical workloads. 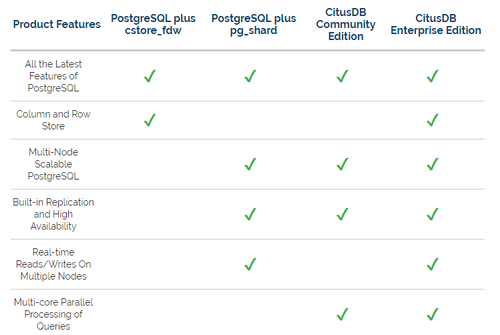 The company started working on CitusDB 1.0 four years ago, to scale out relational databases. Now, CitusDB has been deployed into production across a number of verticals, and received numerous feature improvements with every release. As of today, it has three products: