What is the Story

A WhatsApp message accompanied by a video of Sundar Pichai, CEO of Google being interviewed at Kharagpur Railway Station has been circulated recently. The message highlighted below fails to mention the reason Sundar Pichai's was at the station.

Why the story is misleading? 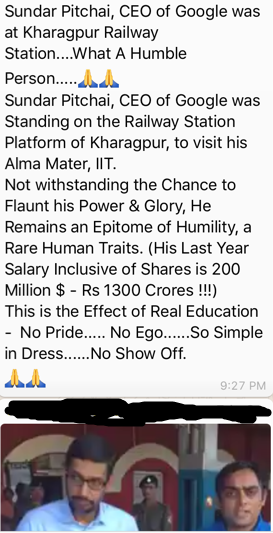 Sundar Pichai was at Kharagpur Railway Station to check the Google sponsored Wi-Fi connectivity. Google first announced its Google Station project in 2015 and pitched it as a way to help improve wireless infrastructure in India, where many people lack stable Internet connectivity. It’s also a way for Google to grow its presence in India — which, in turn, helps its online advertising business, with more people being able to access the search engine in the country. Facebook also has a similar initiative to bring the Internet to more places in India. The social networking giant partnered with India telecommunications company Bharti Airtel for its Express Wi-Fi project that will presumably lead to 20,000 Internet access points installed in different locations throughout the country. [1]