Spring Bank Pharmaceuticals is a clinical-stage biopharmaceutical company engaged in the discovery and development of a novel class of therapeutics using a proprietary small molecule nucleic acid hybrid, or SMNH, chemistry platform. The Company’s SMNH compounds are small segments of nucleic acids that are designed to selectively target and modulate the activity of specific proteins implicated in various disease states. Spring Bank is developing its SMNH product candidate, SB 9200, for the treatment of viral diseases. The Company has designed SB 9200 to selectively activate within infected cells the cellular proteins retinoic acid-inducible gene 1, or RIG-I, and nucleotide-binding oligomerization domain-containing protein 2, or NOD2, to inhibit viral replication and to cause the induction of intracellular interferon signaling pathways for antiviral defense. SB 9200 may play an important role in antiviral therapy by modulating the body’s immune response through its mechanisms of action to fight viral infections.

Spring Bank plans to initiate a Phase 2a clinical trial of SB 9200 in non-cirrhotic patients with chronic Hepatitis B virus (HBV) to explore both monotherapy and combination therapy with a direct-acting antiviral (DAA) in 2016.

Spring Bank Pharmaceuticals was founded in 2002. From its inception, the company has sought to apply its small molecule nucleic acid hybrid (SMNH) chemistry platform toward the discovery and development of novel drugs, and have made significant progress over the past decade optimizing the SMNH compounds with favorable drug attributes. By making specific structural modifications to SMHN compounds, Spring Bank platform enables them to bind to targets in the diseased tissues with high affinity and selectivity. This work has culminated in strong preclinical evidence of safety and activity as well as the first SMNH to go into human clinical studies in early 2013.

Spring Bank's SMNH compounds, including SB 9200, are designed to restore interferon production in virally infected cells by binding to and activating RIG-I and NOD2. 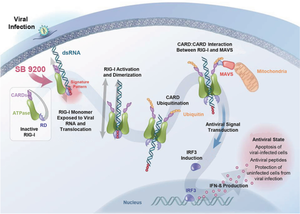 RIG-I is a protein that has three regions: (1) a caspase-activation and recruitment, or CARDs, region, which is implicated in interferon signaling, (2) the adenosine triphosphatase, or ATPase, region that is important for producing energy and (3) a regulatory domain, or RD, region that is important in recognizing characteristic fingerprints of viral double stranded RNA, or dsRNA. Upon exposure to viral double stranded RNA by the regulatory domain region of RIG-I, the ATPase region of RIG-I produces energy allowing the protein to move to and translocate on the dsRNA to confirm the presence of viral RNA, resulting in the full activation of RIG-I. Following activation, RIG-I combines with another molecule of RIG-I resulting in a dimerized RIG-I protein complex. Activation also exposes the CARDs region of RIG-I, leading to its ubiquitination, a process that involves the attachment of ubiquitin, a protein involved in signaling, to the CARDs region of both RIG-I molecules. The activated RIG-I complex then migrates to the mitochondria, where it interacts with the CARDs region of the mitochondrial antiviral signaling, or MAVS, protein. The interaction between the RIG-I complex and the MAVS protein causes the activation of interferon regulatory factor 3, or IRF3, which results in the induction and translocation of IRF3 into the nucleus where it leads to the expression of genes encoding proteins, including interferon-ß, or IFN-ß. The production of interferon causes cells to enter into an antiviral state, leading to apoptosis, or cell death, of virally infected cells, production of antiviral peptides and protection of uninfected cells.