Internet posts and blogs with a title, "Cockroach Theory- A beautiful speech by Sundar Pichai" has been going viral since 2015. Verify.Wiki research shows the story was not narrated by Sundar Pichai.

When asked for reference, all of them who shared the story online and on social media pointed to a LinkedIn post by Divya Brahmbhatt (CSWE), A Professor of Engineering Design at Humber College, Canada [1] . When we contacted her, the Professor sent a link to a "source" of another blogger from India, who runs a programming blog named Bitsnapper. The blog claimed a Google I/O conference speech given by Google CEO Sundar Pichai. When we searched the archives of Google I/O conferences, we found no references to the Cockroach Theory speech given by Sundar Pichai. Also, Google I/O conference is for developers to learn about new product launches of Google. Verify.Wiki found no references to any personal stories shared by Google executives. Also, when we contacted Google, they denied Sundar Pichai giving a speech on Cockroach theory at any conferences.

Another blogger named Hari Rao [2] , claimed [3] he originally wrote the story on his blog site, not Sundar Pichai. Hari Rao also shared his original post from 2013. Verify.Wiki found the oldest reference to Sundar Pichai being the source for the "Cockroach Theory" story on a twitter handle operated by a content marketing individual who used a fake name. [4].

UPDATE: Professor Divya Brahmbhatt (CSWE), of Engineering Design at Humber College, Canada, contacted one of our Verify.Wiki members via LinkedIn and said she removed the reference to Google CEO Sundar Pichai on her LinkedIn article. 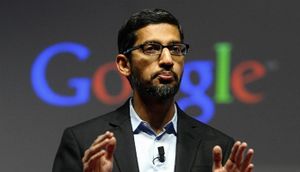