Neural Network or Artificial Neural Network (ANN) is a type of Artificial Intelligence that is inspired by the biological nervous system and its Biological Neural Network (BNN). The process of ANN is the input and output relationship that can be similar to the functions of a human brain. The ANNs are organized with the high number of layers of interconnected neurons where neurons can connect the input layer to the output layer. Functions can be set in the hidden layers between input and output layer, where they can provide a solution function to the given input. ANN can be used in data mining to complete highly complex relationships between inputs and outputs. Also finding patterns in data can be possible due to the non-linear statistical data modeling ability from ANN.

Neural network simulations appear to be a recent development. However, this field was established before the advent of computers, and has survived at least one major setback and several eras.

Many importand advances have been boosted by the use of inexpensive computer emulations. Following an initial period of enthusiasm, the field survived a period of frustration and disrepute. During this period when funding and professional support was minimal, important advances were made by relatively few reserchers. These pioneers were able to develop convincing technology which surpassed the limitations identified by Minsky and Papert. Minsky and Papert, published a book (in 1969) in which they summed up a general feeling of frustration (against neural networks) among researchers, and was thus accepted by most without further analysis. Currently, the neural network field enjoys a resurgence of interest and a corresponding increase in funding.

The basic model behind ANN is based on mathematics models from the brain. The first layer is an input layer where the external information is received. The input layer and output layer are separated by one or more intermediate layers called the hidden layers. Each data input layer is transferred into the hidden layer, under which the input layers are combined forming single nonlinear output layer. The last or the highest layer is an output layer where the problem solution is obtained. However, the number of inputs provided for the function method and the number of outputs needed can be changed. The development of ANN can be created according to the users benefit, which depends on the number of inputs the user has and the outputs the user needs.

The diagram below shows the example of simple ANN characterized with three layers (input, hidden, output) of simple processing units. 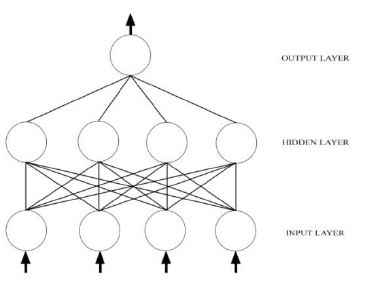 Cases of Neural Networks in use