A WhatsApp message claiming India is the richest country in the world because of one Mr.G. Vaidyaraj donated all of his wealth is False. Verify.Wiki crowd-sourced research found no evidence for such claim. The same story circulated back in 2006 via email claiming a single diamond owned by Mr. G. Vaidyaraj had a higher value than the entire GDP of USA and UK. A re-circulated 2018 WhatsApp message claimed India's GDP to be $36B, but India's GDP in 2018 was $2.2 trillion. India's GDP has always been above $250 billion ever since world bank started keeping records. Although these diamonds may be valuable, a material diamond cannot have a value higher than a country's GDP. [1] [2] [3] 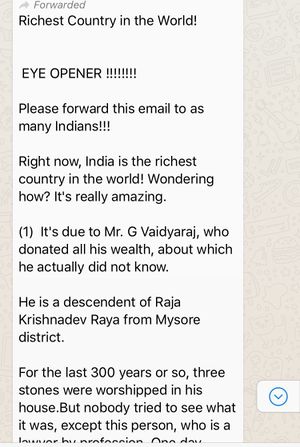