WHAT IS THE TRENDING NEWS STORY 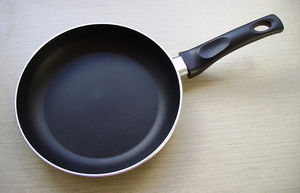 An online article claims that perfluorooctanoic acid (PFOA), a chemical used to make Teflon® (PTFE) which is a synthetic resin used to coat pans to produce a non-stick surface, reportedly “burns off” during the cooking process and is a probable carcinogen. It can cause people to develop flu-like symptoms (called "Teflon Flu" or, as scientists describe it, "Polymer fume fever"). Ingesting particles that flake off scratched non-stick cookware aren't toxic because solid PTFE flakes are inert. The article carries on to mention that although non-stick cookware accounts for 70% of all cookware sold, we shouldn’t trust the toxic chemicals used in these pots and pans.[1]

WHY THE STORY HAS MISINFORMATION

The issue regarding the safety of Teflon® coated cookware was brought to the attention of the public when the original company that patented and used Teflon in their products, DuPont, were sued over their knowledge that PFOA leeched into drinking water in towns neighboring their plant. The lawsuit was settled in 2005 for $16.5 million which included 3,500 lawsuits from the people who drank and were affected by that contaminated water.[2] What is very clear from this, is that the issue was that PFOA had leaked from DuPont's manufacturing plant and ended up in the water supply in neighboring towns. The issue was not PFOAs being burned off during the process of cooking.

Regarding the statement where the article in question mentions that heating Teflon® pans to 500 deg. F causes the release of PFOA, Robert Wolke, professor emeritus of chemistry at the University of Pittsburgh and author of the two-part book series "What Einstein Told His Cook" said, "heating a Teflon® pan to 500 degrees or more (as happens when we leave empty pans on high heat by mistake) can result in smoke and gases that can cause flu-like symptoms in humans and kill pet birds,...(but) the link between Teflon® cookware and cancer is an entirely different subject as there is no PFOA in the final Teflon® product, so there is no risk that it will cause cancer in those who use this cookware.[3]

This statement is backed by the fact that, despite Teflon's® link to long-chain perfluorinated chemicals (PFCs), it is considered safe because part of the manufacturing process of the cookware involves heating the coating to high temperatures, which gets rid of PFOA before the pan reaches the assembly line. A study published in the journal Food Additives and Contaminants tested 26 non-stick cookware products under extreme conditions and concluded that none of them released any noxious chemicals, neither in food nor in the air.[4]

Therefore, even though PFOA is a concern, it's unlikely that we gain exposure to the chemical through the use of non-stick pans. Sources of PFOA are everywhere: in microwave-popcorn bags, fast-food packaging, shampoos, carpeting, and clothing.[5] Studies show that most of us have PFOA in our bloodstreams, and babies show trace amounts at birth.[6] The FDA has tested non-stick pans to evaluate the danger of PFOA exposure to humans, and have stated that the chemical "may be safely used as articles or components of articles intended to contact food, subject to...provisions".[7] One of these provisions is that perfluorocarbon resins (used to make Teflon®) shall have a melt viscosity of not less than 104 poises at 380 deg. C (716 deg. F). This means that manufacturers of non-stick cookware have to abide by these provisions, otherwise they are not allowed to sell their products. This makes today's non-stick cookware completely safe for home cooking, as long as empty pans are not exposed to temperatures exceeding 716 deg. F.

A study performed on a large number of participants, making it one of the largest cohort studies on the dangers of PFOA exposure, demonstrated that there may be a risk of developing certain types of cancer, due to exposure to the chemical, but that the increase in risk was small and could have been due to chance alone.[8] Therefore, even if non-stick products did release PFOA when exposed to incredibly high temperatures, the risk of developing cancer wouldn't be more than that of the general population.

The American Cancer Society states that other than the possible risk of flu-like symptoms from breathing in fumes from an overheated Teflon®-coated pan, there are no known risks to humans from using such cookware. While PFOA is used in making Teflon®, it is not present (or is present in extremely small amounts) in Teflon®-coated products.[9]